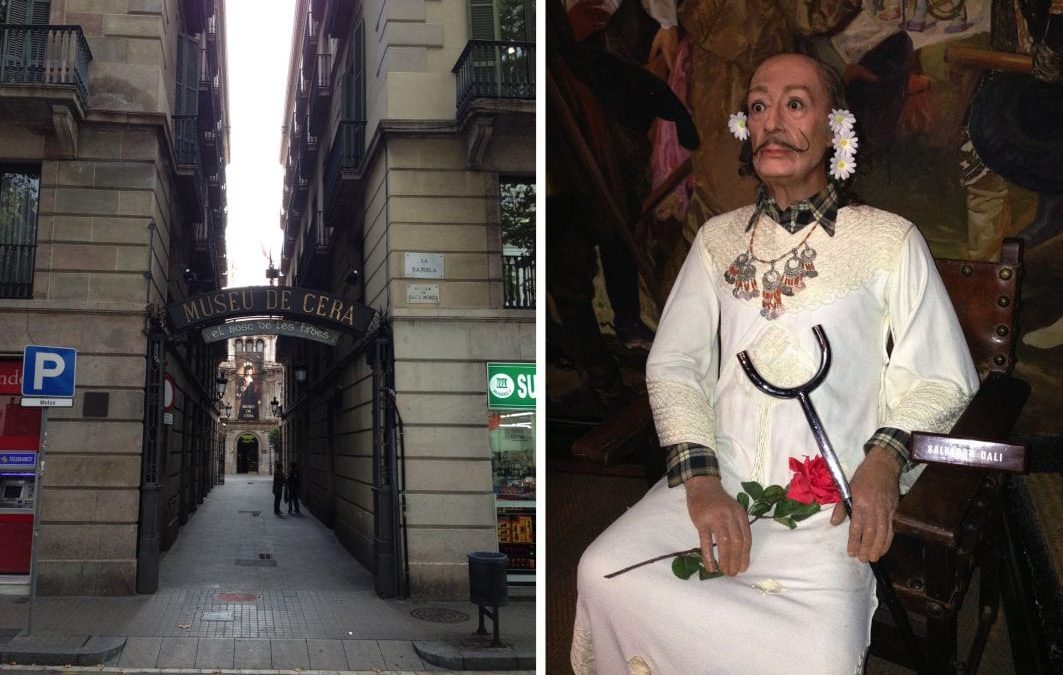 For those of you who are on holidays, I suggest a family visit to Barcelona Wax Museum. The Wax Museum, located a few meters from Las Ramblas in Barcelona, turned 40  in 2013. This is a private museum, without subsidies of any kind, and almost exclusively financed by the income of the entrances.

THE WAX MUSEUM IN BARCELONA

The zone of the “Passage of the Terror”, with murderers and characters from horror movies is ideal for children from 10 years old who are fascinated by the scary Halloween theme of the museum.

The Wax Museum building is as spectacular as the statues that you can find inside. It is a neoclassical mansion built by Elies Rogent. Initially, it was the headquarters of the General Trade credit company, then the Bank of Barcelona and finally of the Credit and Docks. When Enrique Alarcón, set designer, saw the place in an abandoned and almost ruinous state, decided to buy it so as to recreate there his theater set designs and fill it with wax figures.

WHAT YOU CAN SEE IN THE WAX MUSEUM OF BARCELONA

Divided into different rooms, in the museum you can see emperors, musicians, painters, kings, adventurers, fantasy and fictional characters. A perfect blend of some of the most important milestones of the mankind.

In the Crystal Patio we can see the most important figures of literature, music and politics.

If you go with young children, their preferred wax statues are those of the fairies, and the unforgettable clown Charlie Rivel.

The Gothic hall, is a replica of the Saló del Tinell with stone arches (fake, but if they do not know this you can´t tell it) houses some of the most representative figures of the Middle Ages.
The zone of the bathyscaphe and the rest of marine world inspired by Jules Verne, demonstrates the complex engineering that exists behind the design sets created by Enrique Alarcon, fully in force 40 years later.

We had the privilege of a visit to the Wax Museum accompanied by their marketing director Sem Pons. Someone who is not only responsible for the marketing communication activities of the museum, but rather he lives it and transmits it with a contagious passion.

Sem explained to us numerous stories but the one that struck me most is about the vault.

(Photo provided by the Wax Museum of Barcelona)

In this room it is represented the bank robbery by the famous Bonnie & Clyde. But the funny thing is that the location corresponds to the real bank vault, and the frame in which the scene takes place is real: the vault door (which they have never been able to open), the safe deposit boxes where customers kept their money, jewelry and valuable documents (to open the safe deposit boxes they had to make an affidavit), the table with the windows, and even objects like the ledgers. All this stuff was inside the building when it was bought by Enrique Alarcón.

PASSAGE OF THE TERROR

In this room they are reproduced torture scenes and murderers and horror movie characters are represented, so as to shake from fear the bravest children (and adults too).

For the 40th anniversary of the Wax Museum, a contest where the public voted for the characters they would like to see represented in wax took place. The most voted were Leo Messi, Johnny Deep (in his famous role of Captain Jack Sparrow) and Shakira. We’ll have to come back oftenly to see if any of these three figures will join the cast of celebrities of the Wax Museum of Barcelona.

At the end of the tour, do not miss the Click Photo space. A décor like “trading card” where families can get a photo montage together, selecting their favorite characters and set. (price apart from the museum entrance).