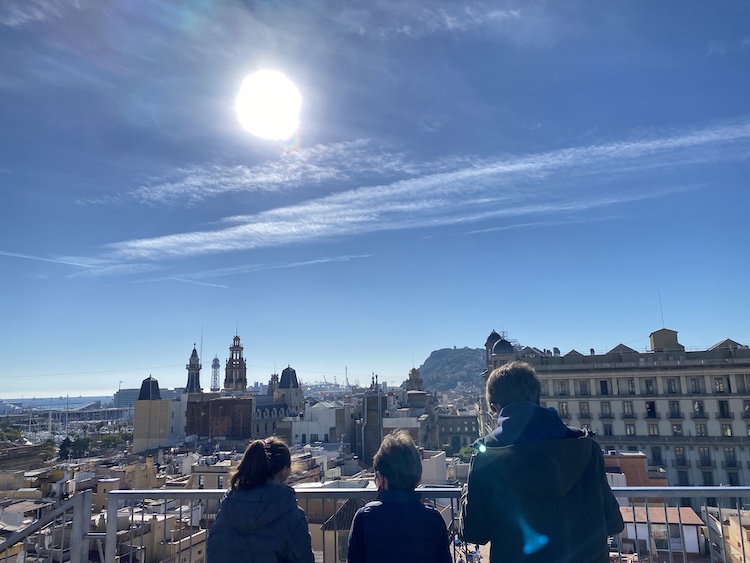 A perfect plan to enjoy one of the most emblematic buildings in Barcelona, ​​the Basilica of Santa María del Mar, an example of the best example of Catalan Gothic that you can find in Barcelona.

Entering the Basilica is quite a spectacle but visitng its towers and strolling through the terraces of Santa María del Mar and enjoying privileged views of Barcelona is a plan that will surely not disappoint you.

HISTORY OF THE BASILICA OF SANTA MARÍA DEL MAR

The Basilica of Santa Maria del Mar began to be built in 1329. At that time the city was full of maritime activity and a large part of the population linked to port activity was concentrated in the Ribera neighborhood: from sailors and fishermen, passing by the merchants who had become rich thanks to the maritime trade, even the most diverse guilds that we can still evoke today through the names of the streets around the temple.

Berenguer de Montagut and Ramón Despuig were in charge of carrying out the project to build the new church in the neighborhood, which was to represent the commercial splendor of the moment.

The Basilica took 54 to build, a time considered to be a record for what it normally took to build similar temples.

ONE OF THE MOST EMBLEMATIC BUILDINGS IN BARCELONA

Santa María del Mar surprises with its greatness, inside you find a large open space formed by three naves, with thirty-three chapels. Thanks to its basilica floor plan, the temple can be seen from anywhere in it.

Like many of the buildings of the time, Santa María del Mar was built with stone from the Montjuïc mountain, the quarry par excellence of Barcelona.

There are several ways to visit the Basilica of Santa María del Mar. One option is the basic visit of the interior. For a donation of € 5 you can freely visit the interior of the temple, the gallery space-museum and the crypt.

Another option to visit the temple is the visit to the towers and terraces of Santa María del Mar, which also includes a free visit to the interior of the temple, the space-museum of the stands and the crypt. This visit has a cost of € 10.00 one person and € 15.00 two adults, as a donation. There is also the possibility of coordinating guided tours.

KNOW THE TRIBUNES AND THE CRYPT

We already knew the inside of the Basilica but we had never gone up to the terraces so we do not hesitate to take advantage of this time when there is no tourism in Barcelona to enjoy this experience with the family.

You start the visit by going up to the stands in the center from where you have an overview of the entire Basilica and its interior splendor, the columns, the windows … a privileged view of the entire temple. Next you go to the Crypt, where it all began. In the 1960s, shortly before starting to build the current crypt of Santa Maria del Mar, archaeological excavations were made under the altar that documented the existence of an early Christian necropolis. Around a hundred burials were recorded between the 4th and 6th centuries, which would indicate that from that moment on, the space now occupied by the Santa Maria del Mar basilica was already a cult focus.

Then, the visit to the terraces of Santa María del Mar begins through one of the towers of the temple. The climb is made through spiral stairs not suitable for strollers or for people with claustrophobia. There are not many, but enough to get a little tired … although it is worth it!

Since the last improvements to the temple, the roofs have become a 360º viewpoint from which you can enjoy some of the best views of Barcelona.

In addition to enjoying the views, it is fortunate to be able to reach previously inaccessible spaces and see elements such as the main rose window, the stained glass windows, the towers, the gargoyles or the upper part of the central nave above the ribbed vaults.

TIPS FOR VISITING WITH CHILDREN:

Here we leave you some information that may be useful if you dare to visit Santa María del Mar as a family.

Ticket purchase: purchased directly at the entrance of the Basilica. No need to book in advance.

This visit is helping that with our donations they can preserve the Basilica.