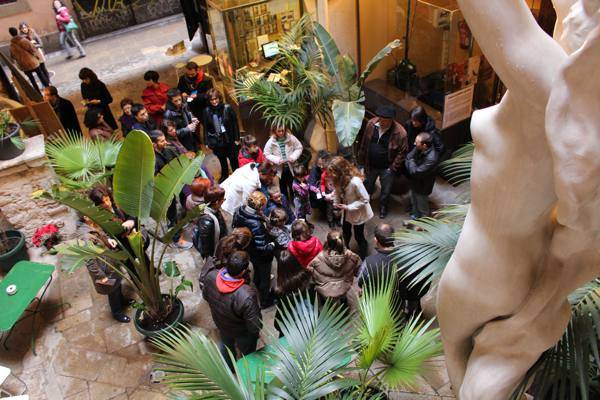 Visiting a museum with children becomes much more interesting if Cal.ligrama Bcn organizes a game of “finding evidence”. We signed up to get to know the MEAM, European Museum of Modern Art  in Borne in Barcelona.

Cal.ligrama Bcn are Ariadne and Gemma … two enthusiasts of the art in all its forms and the architects of introducing to children the works of the European Museum of Modern Art in Barcelona as if they were Tintin … in the search for the treasure! .

We did not know the MEAM, so it was a pleasant surprise, both for the children and for us. The European Museum of Modern Art is located at Palacio Gomis, a beautiful building with the only modernist entrance of Ciutat Vella. The works on display represent the contemporary figurative art. And for those who do not know what it is … you have some pictures that illustrate it perfectly.

The children workshop consisted in locating the clues that were hidden in different corners. The children had to use the “tools” they were encountering and filling the “roadmap”.

Children were going from side to side searching behind the sculptures, guessing where the next clues were hidden, observing the paintings to see if they could help them and listening to the stories told by Ariadna and Gemma.

They had a great time and in the end they were converted in artists themselves.

This Sunday 16 of February there is a new workshop. Don´t  miss it: from 12 to 13:30h. Age: from 5 to 12 años. Price: 5.-€ (Children are alone while parents can enjoy the museum). Registration: reserves@meam.com. ¡Important to make reservation!

Here you can watch the vídeo made by the responsibles of the museum …for sure you will want to visit it: