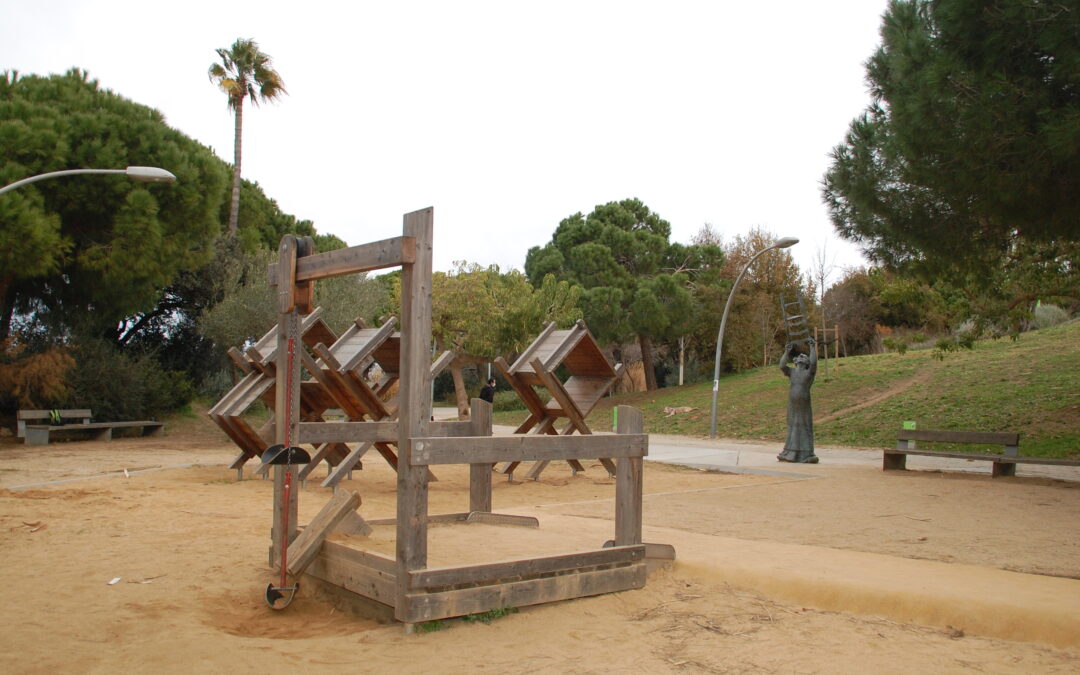 A few months ago we visited the Joan Brossa Gardens with children in the middle of the Montjuïc mountain. Gardens with amazing views of Barcelona and children’s spaces perfect for children. In addition, in Montjuïc you have a lot of options to enjoy with the family.

Montjuïc is an area that offers many plans to do with children. You can enjoy gardens, giant slides for children, some restaurants in the area to have lunch or dinner with children, if you dare you can always take a bike tour with children through Montjuïc, and in summer you have two super cool pools to bathe with children

We made this visit out of curiosity to find out what would remain of the old Montjuïc Amusement Park, which occupied the space now occupied by gardens from 1966 to 1998. That day we decided to take a trip back in time and now I invite you to do it too, you just have to close your eyes and imagine lights and children running around here and there looking for their favorite attraction because the Montjuïc Amusement Park was , in the 70s and 80s, full of life. It was an icon of Barcelona and for more than 30 years it was part of the city’s skyline. Unfortunately there are only a few sculptures left of him and little else.

For those of you who have not had that experience, I will explain a little about its history and what it was like.

BEHIND THE FOOTPRINT OF THE MONTJUÏC AMUSEMENT PARK

In 1966 the Montjuïc Amusement Park was inaugurated where years ago a military powder magazine had existed and also where the Maricel Park amusement park would later be set up, inaugurated in 1930 and closed after the start of the Civil War.

The creation of the park was the work of the Venezuelan businessman José Antonio Borges Villegas, who already had experience in that world since he also managed Coney Island Park and Panama City, in Maracaibo and Panama respectively.

At the time of its inauguration, the park had 41 attractions, many of them from Coney Island Park. From that time they were the Ghost Train or the Ferris Wheel. Over the years other very successful attractions such as the Twister or the Cyclone would be added. Apart from the attractions, the other strong point of the park was a large open-air theater where very successful singers performed at the time. How many times have I been there!

If the 70s and 80s were the park’s heyday, the 90s were the decline. The park, 32 years after its inauguration, closed its doors forever and there is practically nothing left of it. Only the bricked-up access doors to the Ghost Train remain, the structure of the Damm bar, today a place where conventions are organized; the Fanta cement umbrella and, finally, the monument to the sardanas and the sculptures in tribute to Charlie Rivel, Charles Chaplin, Joaquim Blume and Carmen Amaya.

Apart from what little remains of the old park, if you have a fit of nostalgia you can see old photos of the amusement park and try to locate them in the current Joan Brossa Gardens. That is what we did and as if it were a game of clues, we recognized the place where in the past was the blue whale bar or where the theater was and some attractions that we remembered. I take this opportunity to tell you that there is a page on Facebook called “Montjuïc Amusement Park” where you will find old photos and videos of the amusement park.

Now let’s go back to the present and talk about the Joan Brossa Gardens, whose interest goes beyond occupying the same space as the old Montjuïc Amusement Park.

The Joan Brossa Gardens are very close to the Mossèn Cinto Verdaguer Gardens and the Montjuïc Cable Car. They open at 10 in the morning and the closing time is at sunset (varies according to season). The main entrance is from Plaça Dante. In it there is a plaque with a poem by Joan Brossa. After going through the door you will find the old Damm kiosk and on the left the sculpture of Carmen Amaya.

In fact, we entered through Plaça Dante and we left through the point in front of the sardana monument.

The gardens stand out for their varied and lush vegetation, which is appreciated in the especially hot months. For those of you who have a dog, you will like to know that there is no problem in going with him as long as he is tied up.

In addition, the children had a great time because the park has three play areas for different ages. They especially liked the musical cushions and we all had a good time in the parabolic reflector near the old Fanta umbrella.

The design of the playground where the figure of Charlie Rivel is was carried out by the same company that designed the Parc Can Mercader. We really liked it.

Apart from the vegetation and the value it may have for those nostalgic for the old amusement park, I would point out the incredible views of Barcelona from certain points in the park. Views that are even more incredible if you leave the park through the door of the Sardana Monument and go to the Mirador del Alcalde. It is also very charming to see how the Montjuic Cable Car passes over the park.

As I said before, to get to the Mirador del Alcalde you must go through the door where the Monument to the Sardana is. You cross the road and you are already at the viewpoint.

The viewpoint consists of a set of terraces on different levels. In this article we have already told you about our bike tour through Montjuïc.

Don’t miss the mosaic that decorates the floor. Materials such as pebbles, cobblestones, bricks, glass bottles, pieces of iron and fragments of caps were used to do this. Currently, due to its artistic value, it is part of the Municipal Artistic Heritage Catalog.

From there, the views of the harbor are spectacular. And we don’t just see the port. The views of other areas of Barcelona are really incredible.

If when leaving this park, you want more parks, you have the Mossèn Cinto Verdaguer Gardens next door.

OTHER ITEMS WITH PLANS IN MONTJUÏC

Montjuïc is an area that offers many plans to do with children. You can enjoy gardens, giant slides for children, some restaurants in the area to have lunch or dinner with children, if you dare you can always take a bike tour with children through Montjuïc, and in summer you have two super cool pools to bathe with children

You can enter with a dog