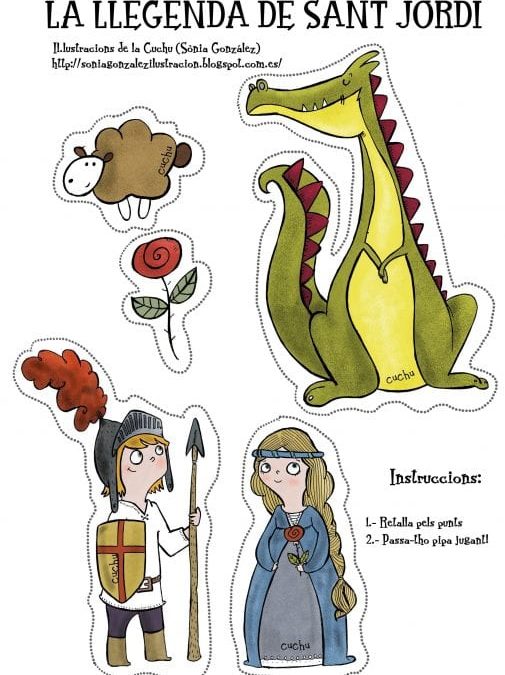 Legend has it that near the Vila de Montblanc there was a great dragon that had all the inhabitants of the town frightened. The villagers did not know how to get the dragon not to approach the wall so they decided to give him food.

THE LEGEND OF SAINT GEORGE

First they gave him sheep, then cows and so on until the evil dragon ate all the animals that were in the village. But he was still hungry and was getting closer to the wall.

The villagers of Montblanc did not know how to stop him and finally decided that they would have to sacrifice themselves one by one. They put the names of everyone in a pot, even those of the king and his precious daughter, the princess.

Each day an innocent hand would take out a piece of paper and the chosen name would be given to the dragon to eat. Finally, the day came when it was the princess’ turn. The King asked the villagers to have mercy on the princess and not let her die, but it was her turn and the agreement had to be fulfilled.

SANT GEORGE AND THE DRAGON

When the dragon approached to catch the princess, a brave knight arrived on the back of a beautiful horse and, wielding his sword, managed to drive it into the dragon’s heart, ending his life. From the wound of the heart came a great stream of blood that fell to the ground and from which grew a beautiful rose bush.

The gentleman picked up the princess and gave her a beautiful rose. The gentleman was named Saint George. The whole town was very happy because he had managed to kill the dragon, the king was so happy he saved the princess that he offered her hand in marriage. But Saint George, very grateful, went on his way.

THE SAINT GEORGE TRADITION: THE BOOK AND THE ROSE

And for that reason the day of Saint George (Sant Jordi) the tradition is that men give women a rose, and taking advantage of the fact that the day of the books is also celebrated, women give a book to men.

If you want to prepare for this day, enjoy with your kids and tell the Legend as a family, here we leave a fantastic download for you. You can paint it or simply cut it out and together and tell the wonderful legend of Saint George. You can download the images in color or black and white to paint.

BOOKS TO GIVE ON SAINT GEORGE

And if you are thinking about the books you could give or gift … here you have two selections of the best books to give to children, a selection of books for you and the kids and a special selection of some of the best children’s bookstores in Barcelona.