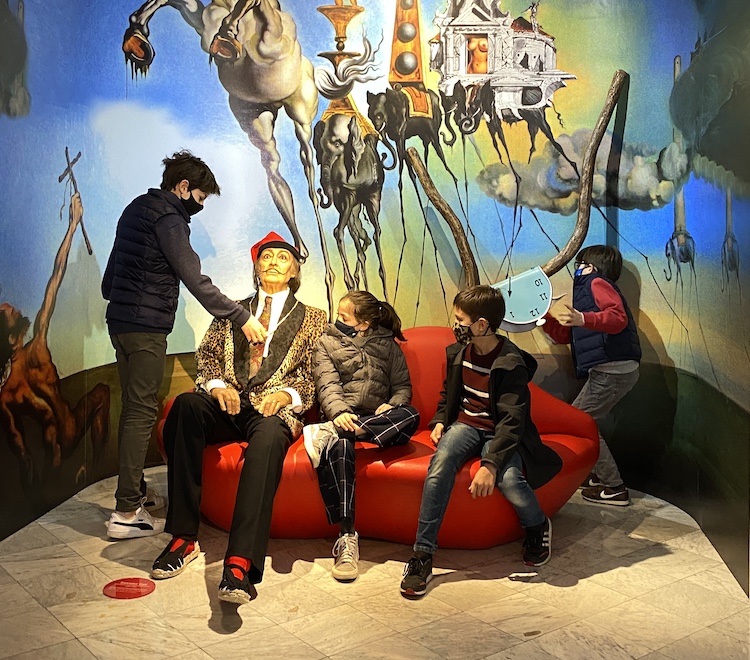 If you are looking for an original museum in Barcelona, ​​the Barcelona Wax Museum will surely not disappoint you. They have also just renovated the entire museum using new technologies, figures and distributed scenography.

The new wax museum in Barcelona opens its doors converted into a 21st century museum without losing its impressive architecture and history.

The Wax Museum is located a few meters from the Ramblas of Barcelona, ​​in a privileged enclave and in the building that was formerly the headquarters of the Bank of Barcelona.

The Wax Museum building is as spectacular as the statues it houses. It is a neoclassical mansion built by Elies Rogent. Initially it was the headquarters of the general credit company El Comercio, later the Banco de Barcelona and finally the credit and Docks. When Enrique Alarcón, set designer, saw the palace in an abandoned and almost dilapidated state, he decided to buy it to recreate his theatrical scenography there and fill it with wax figures

WHAT CAN YOU SEE IN THE BARCELONA WAX MUSEUM

The Wax Museum has just been completely renovated and your experience is now much more fun and has different areas. You can enjoy more than 120 figures in 28 interactive themed scenarios. Each room is dedicated to different sectors of the world of culture, music, sports, and cinema.

You will surely find many of your idols or recognize musicians, painters, adventurers, fantasy and fictional characters. A perfect mix of some of the most relevant landmarks of humanity.

AN ORIGINAL AND INTERACTIVE VISIT

The visit begins with a video in which they report on the history of Barcelona and some of its most recognized characters to go through one of the most different moments of the experience: “get on a lift” to enjoy some of the best views from Barcelona to 360º. Do you dare to go up?

Then begins the visit to the thematic rooms … we explain some of the characters that we are meeting … to meet the rest, you will have to visit the museum.

The great masters of Catalan and world culture appear in each of the rooms. It’s fun to find out who each character is, what he did, and what he’s known for.

We loved seeing Picasso, Dalí, listening to the music of Pau Casals, being able to sit with them and chat. The figures are so well done that it is wonderful to see their similarities. Do you know that it can take up to three months to make each figure?

One of the rooms that we liked the most was that of the music stars. From the Beatles, the great Elton John, Michael Jackson, Billie Eilish, Elvis, Rosalía … while the different songs are playing you can guess who the author is and, if you know it, surely you will be encouraged to sing it with them.

The great masters of the kitchen such as the Roca brothers and a couple of figures who are still preparing… ah! and Ratatouille 🙂

And of course, great athletes also have their space. Can you guess which figure is the most photographed? Yes, of course… Mesi’s. The Argentine idol could not miss in the Barcelona Wax Museum, right? Along with him you will also find other great athletes such as Gasol, Michael Jordan, Serena Williams …

THE PASSAGE OF TERROR

In this room torture scenes are played, assassins and characters from horror movies are represented, to make the bravest children (and the older ones) tremble with fear. Ah .. and you will tell us what you think of the scare. The truth is that we laugh a lot, and we are also scared!

If you think your little one may be scared … don’t worry, they have an alternative path and they warn you that there is something scary in the room!

A PERFECT MUSEUM TO VISIT WITH CHILDREN

During the different rooms, the different figures alternate with other interactive rooms where you can jump and play with the light… It is a perfect museum to visit with the family.

Each corner hides a surprise, an unknown figure, an interactive area where the little ones can play or discover more in depth some of the themes of the rooms.

Everything is designed to learn and enjoy the experience of visiting the Wax Museum with children. We loved it.

Monday to Friday: CLOSED. (* we recommend checking the schedules as these may vary)