10 GAUDÍ BUILDINGS TO VISIT WITH CHILDREN 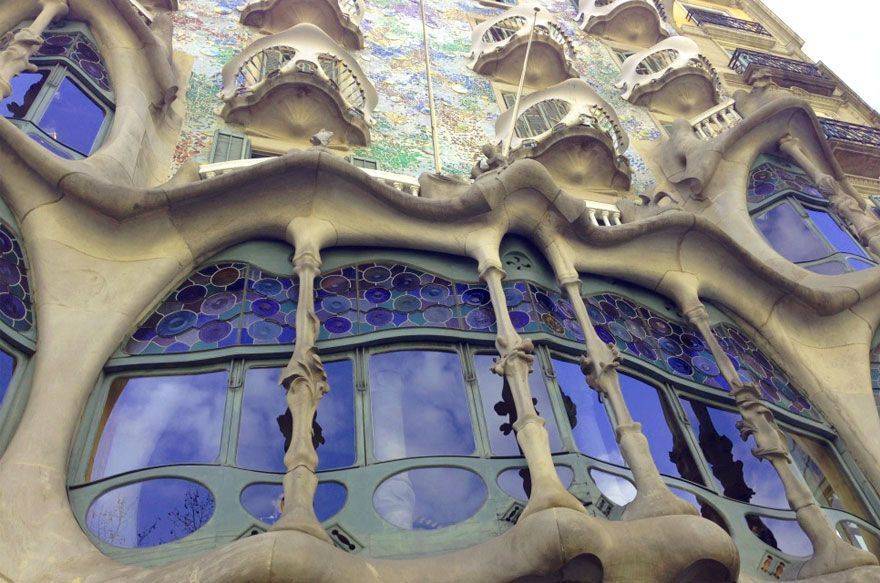 Here are the 10 best Gaudí buildings to visit with the family, whether you are a new tourist or if you have lived in Barcelona for a long time: La Sagrada Familia, Casa Batlló, La Pedrera, Park Güell, or Torre Bellesguard, among others.

THE BEST GAUDÍ BUILDINFGS TO VISIT WITH CHILDREN IN BARCELONA

The Sagrada Familia is one of Barcelona’s landmarks and one of the best-known basilicas in the world. Gaudí began its construction in 1882 and it has not yet been finished. We visited the Sagrada Família with kids, tried out the children’s audio guides (available in several languages) and we recommend the experience: we toured the towers, the crypt, the interior and the exterior of the church, having a great afternoon with the family.

This original building designed by Antoni Gaudí in 1906 is one of the icons of Barcelona’s Passeig de Gràcia and of Modernisme in general. Gaudí was inspired by nature, designing a façade reminiscent of the waves of the sea, balconies with wrought iron like climbing plants, and chimneys resembling warriors. Today it is one of the most visited places in Barcelona

Do you want to visit the Pedrera? You can buy your ticket here: tickets to La Pedrera (Barcelona)

Another of Gaudí’s most emblematic works, and not far from Casa Milà, it is a must if you want to get to know Barcelona. The dragon on the façade is the building’s hallmark, and if you want to visit Casa Batlló as a family, we recommend the dramatised visits, a cultural plan to get to know Gaudí in a fun, entertaining way for all ages.

Do you want to visit Casa Batlló?Here you can find information and buy tickets

Park Güell is the most famous park in Barcelona. It has served as a backdrop for countless films, photo shoots, and as an inspiration for countless artists. Eusebi Güell commissioned Antonio Gaudí to build it between 1900 and 1914. The use of tiles as a colourful decoration in the park, fills the benches with light, winding like the sea waves. By the way, here you can get one of the best views of Barcelona. It was once free to visit the park, but a few years ago the City Council decided to charge an entrance fee.

If you want to get your ticket to Parc Güell without queues and with a discount, you can click on this link.

Otherwise, you can find more information and buy tickets here

Some describe Torre Bellesguard as the “most exclusive Gaudí”. In fact, beneath the Collserola natural park is one of Gaudí’s most beautiful and little-known works, which has been open to the public for only a few months. The building, also known as Casa Figueras, was built in 1900.

Do you want to visit Torre Bellesguard?Here you can find information and buy tickets

The Güell Palace was one of Antoni Gaudí’s first major commissions, although it is another of the unknown works of this renowned architect. The palace, located near Barcelona’s Ramblas, has more than 2,850 square metres.

Do you want to visit The Güell Palace in Barcelona ?Here you can find information and buy tickets

This modernist building in the Eixample is also the work of Antonio Gaudí. If you come to admire its façade as a family (the inside of the building cannot be visited), we recommend that you take the opportunity to “refuel” at the Chocolateria Brescó, located on the ground floor of the building, and one of the best places in Barcelona to have a chocolate and biscuits

Casa Vicens is a modernist building located in Carrer de les Carolines in Barcelona, and one of Antoni Gaudí’s first works.

Do you want to visit Casa Vicens in Barcelona ?Here you can find information and buy tickets

This school designed by Antoni Gaudí is located on Carrer Ganduxer, and belongs to the period when the architect was inspired by medieval Gothic art. Gaudí also designed the garden surrounding the building, where he planted pines and palm trees, and planned paths and stone benches that sketch the design he would later use in the Park Güell. The building is not open to public visits

HAVE YOU BEEN TO ALL THESE BUILDINGS BY ANTONI GAUDÍ? WHICH IS YOUR FAVOURITE? WHICH ONES DO YOU STILL HAVE TO VISIT WITH THE KIDS?